Jacqueline Ribeli – Master’s studies motivated by a thirst for knowledge

Jacqueline Ribeli’s master’s thesis in Food Nutrition and Health took her to Madagascar, where she threw herself passionately into her work on the cultural factors influencing dietary diversity for children. And it paid off: her thesis won the 2020 Research Award of the Swiss Forum for International Agricultural Research (SFIAR).

What was your motivation for pursuing the master’s programme in Life Sciences in Food, Nutrition and Health at BFH-HAFL?

This master’s already interested me when I was studying for my Bachelor’s in nutrition and dietetics at BFH Health. However, at first I could not grasp the opportunities that would open up with further study. After a volunteer placement with the non-profit organisation AiNA soa, which works for better healthcare in Madagascar, the desire grew in me to explore the factors influencing stunting in Malagasays more deeply through research work. Stunting means that a child is prevented from developing properly and is small for their age. A range of factors, for example an unbalanced diet, lead to such children being deficient in important nutrients, specifically in the early years. The result is that they cannot achieve their full development potential, which can lead to life-long, generation-spanning consequences. In Madagascar, one out of two children under five is affected by stunting. In a brief conversation at the information evening on master’s studies I found out that I could take up this issue as the subject of my master’s thesis. I was encouraged by the wide range of modules on offer and knew straight away that I wanted to do my master’s. I was very grateful that my husband supported me in this decision, which enabled me to study full time.

Very briefly: what was your research question and what are the results of your project?

I carried out my research in the region of Vakinankaratra in the highlands of Madagascar, where the diet is significantly based on agriculture and farmer’s markets. I was particularly interested in the way cultural habits affected diversity in the diets of children in the first five years of their life. In general, knowledge about the optimum diet for children is available. However, in many cases the money is not available for varied meals. For example, animal products are rarely consumed. What’s more, customs and traditions can limit the consumption of certain foods. For example, it’s rumoured that a child shouldn’t eat eggs until it can say 'dadada', because otherwise it would go deaf. On festive occasions, most families have a special menu which is more expensive than a normal meal. Depending on the family, main meals are kept very simple for weeks so that money can be put aside. Saving up for big occasions such as the 'Famadihana', the ritual turning of the bones of the dead, can take up to a year and may therefore have a negative effect on the dietary diversity.

What special memories do you have of your fieldwork in Madagascar?

The rice which was an indispensable part of every meal. There were often little stones left in it, which I found a challenge. The close collaboration with the translators was very valuable and often great fun, especially when there was a crack during a meal because I had bitten on another stone. The interaction with the local population was a highlight. I took portraits of lots of the participants with my camera, which I then handed over on my last visit as a token of thanks. People were thrilled.

I have special memories of every village community I visited to collect data. For example, in the remote village of Ibity I met the Community Nutrition Worker. She showed me the little room where she regularly weighs and measures all the village children. It moved me to tears to see the amount of passion with which she pursues her labours in the battle against malnutrition.

In Ankazomiriotra, one man took a lot of time for us on what’s known as a 'transect walk'. We walked through his fields with him and he explained to us about the months in which the different food crops were planted and harvested and what part of them was earmarked later for their own consumption or for sale. I was allowed to film him during the walk. These shots plus the fascinating encounters in Behenjy enabled me to make a short film about my master’s project.

Your work has won you the SFIAR Master Thesis Award. What does that mean to you?

I am overjoyed to have won this award. It shows me that all the dedication that the AiNA soa team and I invested was really worthwhile. The SFIAR award makes visible the close link between agricultural and nutritional issues. It gives me strong motivation to develop further in the scientific field.

As a student of this degree programme, you will engage with cutting-edge issues at the intersection of food and nutritional sciences and develop specific expertise along the entire value chain.

The Swiss Forum for International Agricultural Research (SFIAR) has honoured innovative Swiss projects with an award since 2008, to support the efforts made by many Swiss institutions working in the area of agricultural research.

The SFIAR Award Ceremony 2020 was held on 8 December 2020 as an online event with participants from Switzerland and all over the world. 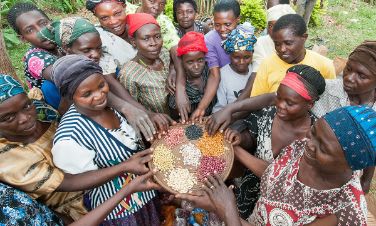 What are your plans for the future?

My plans are still open. At the moment I have a temporary post as a nutritionist. I am also doing voluntary work as the communications manager for AiNA soa. I’m looking for a job at the same time. I’m excited to see where a door may open. I would be keen to get a foothold in research as a research fellow or work in the public health field. Working on projects to make nutrition more sustainable is another very interesting area for me. I may go on working as a nutritionist, with the aim of working as a university lecturer in a few years‘ time.

MSc in Life Sciences with Specialisation in Food, Nutrition and Health

Just Too Small? The Heavy Toll of a Low Dietary Diversity in Children: Exploration of Cultural Influencing Factors in Madagascar’s Central Highland