As an academic library affiliated to NEBIS, we acquire, catalogue and make available printed and electronic documents in the agricultural, forest and food sciences. 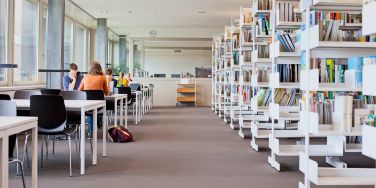 Our print holdings comprise around 16,000 monographs and 200 specialist journals in German, French and English. They are fully indexed in the online catalogue of the NEBIS network.

During our opening hours, you can borrow documents from our library directly at the library desk. Physical documents from other member libraries of the NEBIS lending network can be ordered to our library for free. All you need is a properly configured NEBIS user account.

The BFH libraries, which are currently split across two separate library networks (NEBIS and IDS Basel Bern), will be merged on a new platform together with over 500 other libraries. The GoLive of the new, nationwide library system is scheduled for December 2020.

The project to build the Swiss Library Service Platform (SLSP), which has been running for several years, will not merely unite the BFH libraries on one platform.  At the same time, over 500 university libraries and other scientific libraries across the nation will be migrated to the new SLSP platform. The GoLive is scheduled for 7 December 2020. The changeover will lead to the following adjustments for users.

The majority of BFH libraries today are part of the NEBIS network – their users will find that the new SLSP search interface looks familiar. For users of the HKB Music Library and the Sports Media Centre at Magglingen the changes will be greater. The libraries will provide all users with appropriate information and support.

The changeover requires all library uses to re-register.

Data in the Netherlands

The data of library uses will be stored on a server in the Netherland. Therefore, the authorisation for the transfer of the necessary personal data will be required at the time of registration.

Up to now only the libraries in the NEBIS network were able to offer users the possibility to order media from other libraries and collect them from their own. The HKB Music Library and the Sports Media Centre at Magglingen are pleased to offer this service as well from December 2020.

Replacement of the old library system

The replacement of the old library system will take place in stages. Borrowing media will probably be possible until a few days before the GoLive in December. Other processes such as recording and modifying catalogue data will be stopped by late October, and new media cannot be incorporated after that. The NEBIS lending network will probably discontinue its service by mid-November. From then on, orders can only be placed for collection on site or by postal dispatch (if offered). Reserving media on loan will no longer be possible.

The BFH libraries will inform you in due course about the further procedure and about any steps you will be required to take.

As a learning and information center, we offer assistance in searching for, acquiring and processing specialized information. We regularly offer courses for members of BFH.
We also teach scientific methods, information literacy, literature search and reference management on bachelor and on master level.

You can also contact us if you have any questions regarding the reference and information management tool Citavi at BFH: citavi.hafl@bfh.ch.

Members of BFH will find direct links to our search tools and online resources as well as abundant information about literature research and reference management on our Intranet site and on the learning platform Moodle.